Below are the basic requirements for adult EU citizens in Tenerife Spain. Bear in mind that after the UK leaves the EU  British Citizens will be able to apply for a third country Foreigner’s Identity Card The details of this procedure are here (TIE):   BUT it is important to stress there is no obligation for those British people who already hold the green residency certificate (either credit card sized green paper or A4 version) to exchange it for the TIE. Both documents will be valid in demonstrating residency status and rights under the Withdrawal Agreement, even after the end of the Transition Period until further notice.  However new applicants for residency applying after the 6 July and able to demonstrate they were residing in Spain legally before the 31st January 2021 will be issued with the  TIE

You must attend the National Police Station /Extranjeria in person and the certificate will be issued either on the day or you return to collect the next day.  email adeje.citaudex@policia.es for an appointment for white NON-RESIDENT certificates in the South

If you already have an NIE number this stays with you for life and you can then jump to point 2 or 3 depending on your circumstances.

2) Green Certificate of Residence Registration – from 1 Jul 2020 this is NO LONGER AVAILABLE TO UK CITIZENS (Also wrongly called Residencia by some people) this is in a credit card sized format made of green coloured paper, it can be the older style A4 green coloured paper format which is still valid but it is useful to exchange for the new format if you are able to. This option is no longer available to UK citizen applicants arriving after 1 Jan 2021 see here

The  European Citizen Green Certificate of Residence Registration is valid for indefinite or fixed length permanent stays of over 3 months.

2a) Family member regrouping with an EU citizen resident of Spain

From 1 January 2021 Non EU citizens (Including British People) will require Visas for stays of longer than 90 days which  will need to be applied for BEFORE entry into Spain source: Pages – Long-Term Visas (exteriores.gob.es) Once a long stay visa is granted then you must apply for a foreigners Identity card:

Foreigners who are granted a visa to stay in Spain for a period exceeding six months must apply for a foreigner identity card at the corresponding Provincial Brigade of Immigration and Borders dependent on the Ministry of the Interior, within one month from the date of arrival. Foreigner identity cards are not required to holders of visas issued to carry out seasonal work. source:

WHERE DO BRITISH NATIONALS APPLY?

New Arrivals after the 1 Jan 2021 can only make their applications  in the UK at the Spanish Consulate more information here. European nationals will continue to be seen  at the South Comisaria, Santa Cruz and also Puerto de la Cruz depending on their catchment area.

EU citizens read on below

ALL Documents not in the Spanish language must be apostilled and legally translated.

When you attend the National Police station/Extranjeria the residence document will be issued on the spot.

3) TIE for UK citizens: The Withdrawal Agreement has provided for the establishment of a transitional period until December 31, 2020. During the transitional period, your rights derived from the application of EU Law will be maintained. Current (green) registration certificates and family member cards for EU citizen available to British citizens and their family members residing in Spain are valid documents to prove legal residence in Spain after the UK has withdrawn from the EU and benefit from the provisions of the Withdrawal Agreement.

However, from the first week of July (Monday 6th), British citizens and their family members residing in Spain and holding a green residence certificate will be able to request a uniform format residence document (TIE), which will prove the condition of their beneficiary carrier of the rights contemplated in the Withdrawal Agreement . If you are a British citizen or a third-country national, a relative of a British citizen, who comes to Spain during the transitional period, you will also benefit from the Withdrawal Agreement.

During the transitional period, and until the uniform format residence document (TIE) begins to be issued from the first week of July, the current registration certificates and family cards of EU citizens will continue to be issued, which will have the same supporting effects of being a beneficiary of the Withdrawal Agreement than those issued before February 1, 2020. source: http://www.interior.gob.es/web/servicios-al-ciudadano/brexit

4) Certificate of NON residence for Spanish Bank – stays in TOTAL of under 6 months in any one year · Original & copy of application form Ex15 and Modelo 790, photocopy and original of Passport when you attend the National Police station/Extranjeria. Most Banks will see to this on your behalf if you have a non-residents bank account with them, but they do make a charge for the service.

So lets look at these and other different types of document in more detail:

Firstly
EU citizen’s registration Certificate
This was issued as a green coloured A4 watermarked paper but from November 2011 the format is credit card sized but still made of paper….. For European  non British people living in the south, its issued at the National Police Station in Las Americas
Obtaining a green certificate cardboard card is an immigration requirement for anyone who stays here in Tenerife for periods of longer than 3 months at a time, it will show your NIE which is a foreigners identity number, but if you don’t already have an NIE number you can apply for one first, see above, and you should already be on your local authority’s Census list called the Padron.
You should also go back to the National Police Station and revoke this certificate if you return to your home country for good.
In other words the European powers-that-be have decided that 3 months holiday at a time is long enough for anyone!

Incidentally if you don’t go back and you stay here in Tenerife for 5 years continuously and intend to stay for an indefinite period after that, then you should obtain the permanent residents’ version – which is still a green paper but has a slightly different wording on it.

Certificates issued in the A4 format is still currently valid and both formats are still valid for existing holders who are UK citizens until further notice. 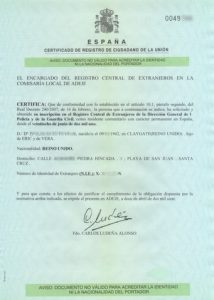 Certificate of Spanish FISCAL residency. This shouldn’t be confused with the immigration requirements dealt with above.

You can get a Spanish Fiscal residency certificate from the Spanish Tax office called the “Hacienda” and this is basically a confirmation that you paid your income taxes, on earned or unearned income in Spain, in a particular year, or are registering to do so from now on.
Taxation is a very complicated subject, but as a rule of thumb if you spend 183 days or more in Spanish territory during any one calendar year .. a Spanish Tax year runs from January to December by the way…. Then you will be fiscally resident in Spain. You should also take the UK’s Statutory Residence Test rules into account – if there is a conflict then this will be covered by the agreement between the 2 countries

NIE certificate – this is a white A4 paper which is issued only to Non residents to show that they have an NIE number, this number stays with you for life. The document does not show an address and has no validity for the purposes of confirming your identity or immigration status. A White certificate NIE number is required when you are NON resident, i.e. staying for less than 3 months at a time, and wish to:

Spanish Certificate of NON Residency,
This is also a white A4 document and also carries your NIE number it can be issued by the Police Station in Las Américas if you want to go there and apply for it yourself, but more usually the bank where you have your Non resident’s account applies for it on your behalf (for which privilege they charge you by the way) This certificate is usually renewed every 2 years.

Certificate of Empadronamiento: The certificate which is valid for 3 months, proves that you have been registered on the Municpal census (Padron) as living at your current address in Spain.

Initially you will be registered under your passport number(s) and then you return to confirm your residence status when you have your certificate of residencia or TIE.
To register you will need a current passport and copy and either your deeds and a copy OR a valid rental agreement in Spanish and a copy.

You should advise the Town Hall of any changes of address, but in any case if you have not had any dealings at all with your town hall during a 2 year period (five year period for EU citizens) you are required by law to re-register. You would use this certificate to prove your address for things like a car purchase for example or to register at a National health doctor.

If you are Non Fiscally Resident – remember that means you don’t pay your income taxes here, but do own property here in Tenerife and you also let that property out to long or short term tenants, from January this year you will be required to obtain a UK bi-lingual certificate proving fiscal residency in the UK.
This is a dual language document and is issued by your local UK tax office and is valid for 1 year.

TIE residence document: article 18.4 of the Withdrawal Agreement of the UK and the European Union

Latest info for UK Nationals: here
https://www.gov.uk/foreign-travel-advice/spain
If you are resident in Spain, you should carry your residence document (the green paper EU residence certificate or the new TIE), as well as your valid passport when you travel. See examples HERE.
A new website has been launched by the Spanish Government to help those travelling to Spain to understand restrictions and general measures throughout Spain
https://travelsafe.spain.info/en/
Restrictions and requirements for visitors to Tenerife are updated here: TRAVEL TO TENERIFE. FULL COVID-19 INFORMATION | (webtenerife.co.uk)

By continuing to use the site, you agree to the use of cookies. more information